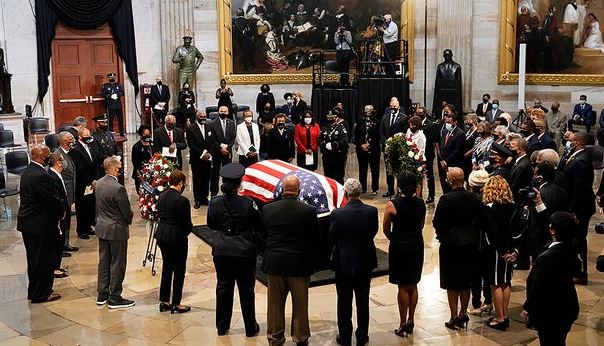 WASHINGTON – Even in death, Congressman John Lewis continues to make history, now being the first Black lawmaker to lie in state in the Capitol Rotunda.

Leaders and lawmakers from across the country gathered to pay tribute to the long-time Georgia lawmaker and civil rights icon.

House Speaker Nancy Pelosi was present to greet Lewis’s flag-draped casket when it arrived Monday to Joint Base Andrews in Maryland. A motorcade then carried Lewis’ body to the U.S. Capitol, stopping at Black Lives Matter Plaza along the way.

There was an outpouring of love and respect as mourners paid respect to the congressman, but there was one leader noticeably absent.

President Donald Trump told reporters he would not be attending any of the planned services for Lewis.

Trump and Lewis have clashed in the past.

In 2017, Trump tweeted that Lewis was “all talk … no action or results,” after Lewis announced that he would not attend Trump’s inauguration.

Lewis said then, “I don’t see this president-elect as a legitimate president,” adding he believed the Russians participated in helping to get Trump elected and destroying the candidacy of Hillary Clinton.

After the 80-year-old lost his battle with pancreatic cancer, Trump ordered the White House to lower flags to half-staff.

The president tweeted, “Saddened to hear the news of civil rights hero John Lewis passing. Melania and I send our prayers to he and his family.”

But the country did not focus on Trump, all eyes were on the momentous tributes being paid to Lewis.

The “Good Trouble” icon’s body was carried in a horse drawn carriage across the Edmund Pettus Bridge in Selma, Alabama, where Lewis was beaten on “Bloody Sunday” in 1965.

Instead of blood saturating the ground as it did that day, the pavement was covered in rose petals in honor of the late, great congressman.

An honor befitting the true leadership Lewis has exhibited throughout his life of service.

We at African-American News&Issues salute you.