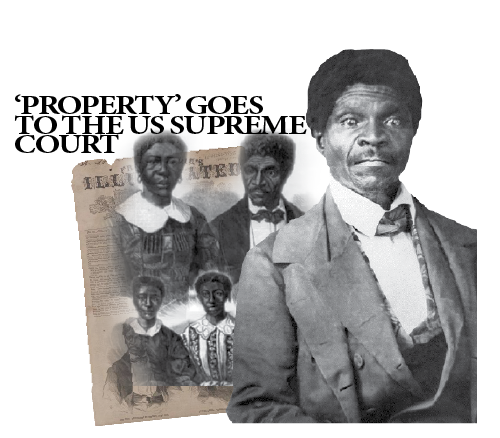 Dred Scott was a slave who unsuccessfully sued for his freedom and that of his family in the Dred Scott v. Sandford case of 1857, popularly known as the “Dred Scott case.”

Scott was born into slavery in 1799 in Virginia, and was eventually sold to Dr. John Emerson, a surgeon in the U.S. Army.

As an army officer, Emerson moved frequently, taking Scott with him to the free states of Illinois and Wisconsin. During these times, Scott married a woman named Harriet and the couple had two daughters.

After Emerson died in the Iowa Territory in 1843, his widow Irene inherited his estate, including the Scotts. For three years after Emerson’s death, she continued to lease out the Scotts as hired slaves. In 1846, Scott attempted to purchase his and his family’s freedom, offering $300, about $8,000 in current value. Irene Emerson refused his offer. Scott and his wife separately filed freedom suits to try to gain their freedom, stating that because they had lived in the free states of Illinois and Wisconsin for four years.

On March 6, 1857, the U.S. Supreme Court ruled 7–2 against Scott.  They decided that living in a free state and territory did not entitle an enslaved person to his freedom. In essence, the decision argued that, as someone’s property, Scott was not a citizen and could not sue in a federal court.