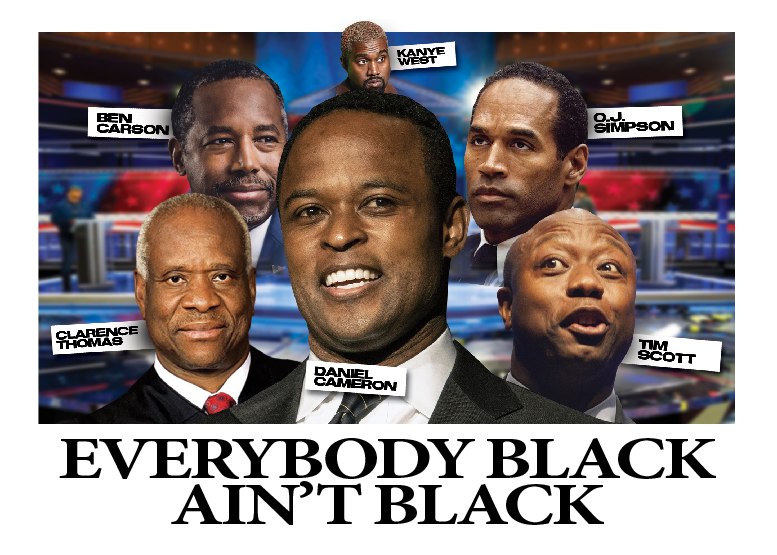 Is it time to take a deep breath? It seems as if we need to do that more these days. It’s the Black person’s remake of Terry McMillan’s “Waiting to Exhale,” but instead of it being a group of women who feel overlooked and unappreciated by the Black men in their lives, it is a collective of Black people (men and women) who are tired of being flat-out disrespected and disregarded BY THEIR OWN PEOPLE!

“These new negroes are more dangerous than the KKK. The Blacks who got into politics after slavery and Jim Crow did things to uplift other Blacks, but not today,” said African-American News&Issues publisher Roy Douglas Malonson. “This new Breed of Black folks want to say they are for ALL the people and forgetting who they are .. you are a black man first and foremost! How did you forget that? Trust me, THEY will let you know how BLACK you are when they need to.”

People like Charles Barkley, Shaquille O’Neil, Daniel Cameron, Clarence Thomas, Dr. Ben Carson and (never forget) O.J. Simpson have come under fire because many say they have not been standing by Blacks.

Have you ever heard the phrase, “all my skinfolk ain’t kinfolk?” If not, let us give you an explanation and throw some examples your way. Simply put, the dark melanin is not the single qualifier of your “blackness,” your CONSCIOUSNESS and UNDERSTANDING of the Black experience is what you must have.

The saying has been credited to the great novelist, essayist, anthropologist and filmmaker Zora Neale Hurston, who’s left a cultural legacy of Black pride for past and future generations to enjoy and to educate themselves.

Michael Washington wrote in an online essay, “Souls that inhabit white bodies can be allies and accomplices in the fight against oppression, in the same way that Black folks can be agents and accomplices in promoting, promulgating and protecting white supremacy. As my grandmother once said, (like Hurston) ‘All your skin folk ain’t kinfolk.’ Meaning that you can inhabit a black body and be an agent of white supremacy. Just ask Supreme Court Justice Clarence Thomas, or any of the thousands of Black Americans who are more concerned with white feelings than with black lives and bodies. Black folks don’t have the market cornered on being “woke,” and there is no agreement about how best to actualize the potentiality of the black community.”

Sounds about right these days, especially with the foolery we hear coming out of some Black Americans’ mouths in defense of some of the actions or atrocities whites have committed against us.

Kentucky Attorney General Daniel Cameron has come under scrutiny from Blacks after he seemingly made excuses about the lack of charges filed against the police officers who shot and killed Breonna Taylor, a young, law abiding EMT who was in her home when police barged in under a no-knock warrant and opened fire. Turns out, Taylor was innocent, and no one is being held responsible in her death. They are treating it like an “oops, my bad” moment. Two of the officers were not charged at all, and the other one was charged with “wanton endangerment” for blindly shooting in the apartments, which could have potentially harmed her neighbors. They totally missed the memo that Taylor DIED… and the Black man that we put our faith in to bring justice for Taylor and her family completely let us down.

Both Shaquille O’Neil and Charles Barkley defended the decision, agreeing that there were not significant charges to file against the police and mentioning that Taylor’s boyfriend fired at officers — disregarding the fact that the officers allegedly did not announce who they were and Taylor’s boyfriend thought he was shooting at intruders.

And in another example, Dr. Ben Carson touts when necessary that he grew up in the ghetto with rats and roaches, and we are not saying that should make him Black — nope, that made him poor — but the now rich Republican mentions those childhood bullet points when he needs to flash his “Black Card” while endorsing white America and being one of President Donald Trump’s cronies.

Knowing that Blacks are disproportionately dying by COVID-19/ coronavirus, Carson was trying to peddle a “snake oil” cure of the experimental botanical extract, oleandrin, with MyPillow CEO Mike Lindell. It was dangerous, untested and did not have FDA approval, but investors were looking to make a quick buck. Again.

And how can we ever forget O.J/ Simpson, who wanted absolutely nothing to do with the Black race until he was charged with the murder of his white wife. All of a sudden after he “made it, he divorced his Black wife, only dated white women, golfed with white men, and took photos and partied with his elite Brentwood friends until he had to run to a Black attorney (RIP Johnny Cochran) and the forever forgiving race of Black people who publicly rallied around him, if for nothing more than the fact that we just wanted to see a brother win at something. It was dubbed “the trial of the century” but the skinfolk was found not guilty after Cochran’s famous “if it doesn’t fit, you must acquit” closing arguments show in the courtroom.

Will we learn? Will we finally understand? Be loyal to who is loyal to you. Don’t vote for or support someone simply because they are Black and make those “skinfolk” earn your trust and respect.

And if you are someone who has been detached from your blackness, don’t turn your back on your people now, then run to us later waving an EXPIRED Black card when needed.