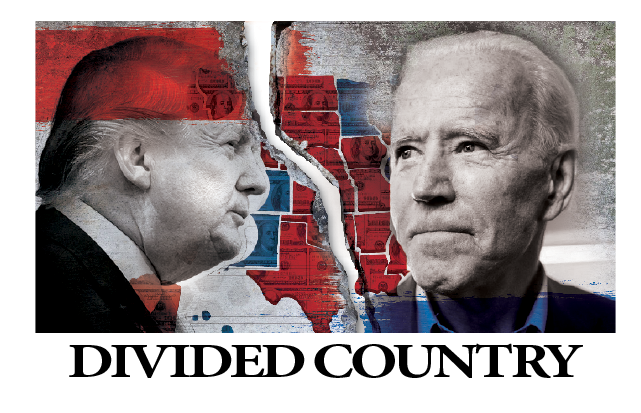 “If you can convince the lowest white man he’s better than the best colored man, he won’t notice you’re picking his pocket. Hell, give him somebody to look down on, and he’ll empty his pockets for you.” — Lyndon B. Johnson

That quote sort of sums up what the hell is happening in America.

President Donald Trump has brought racism back to the forefront, with white supremacists no longer hiding under hooded cloaks and the cover of darkness, they are wearing police badges, judge robes, teaching our children, and — if we let them – signing our paychecks with a smirk while convincing you to keep working for lower wages than you deserve.

Then there are some who are straight up hillbillies. Just look at the Trump rallies and see them proudly speaking to news reporters. Shouting messages of hate, waving Confederate flags and barely able to speak a clear sentence while going against all medical advice and common sense – because their president told them to — not wearing masks and putting themselves and others at risk.

These are the types of folks Johnson was referring to.  Trump has brainwashed these people for his own agenda. People who the mega-rich businessman would never even take a second look at if they approached him on a street — or even in one of his ritzy hotels. Yet, because they are his captive audience, he feeds them what they need in order to keep them doing his bidding; voter suppression, anarchy, chaos — a perfect distraction for an America under siege.

Right now … the distraction is Blacks versus Whites … Democrats versus Republicans…  and let’s not forget… Trump versus Mexicans or anyone else who does not “suit his pedigree.”

Yet, many people don’t see what is happening right underneath their noses, even though the “revolution IS being televised.” (Shout out to Gil Scott-Heron)

Legend says that President Lyndon B. Johnson said after signing the Civil Rights Act, “We have lost the South for a generation.” Many don’t realize he was a ruthless politician who made “political decisions” to serve his own agenda.

While History Class teaches our children that Johnson was a “hero” who is responsible for passing the monumental bill, it fails to tell them Johnson used the word “nigger” a lot. In fact, he referred to it as the “Nigger Bill,” according to his biographers.

Longtime Jet Magazine correspondent Simeon Booker wrote in his memoir, “Shocks the Conscience,” that Johnson once told him he should “thank” him for all he’d done for black people. Sounds like anyone we know today?

And Johnson biographer Robert Dallek wrote, when asked to explain his decision to nominate Thurgood Marshall to the Supreme Court rather than a less famous black judge, Johnson replied, “when I appoint a nigger to the bench, I want everybody to know he’s a nigger.”

But even with his RACIST views, Johnson still did things to advance those he did not even respect.

This all may be surprising to you. But it is not surprising to my generation or me. Like we said in the beginning, it’s about knowing WHO to pickpocket.

So back to what is going on today.  This country is divided! And some presidents have possessed the ability to bring it together for the greater good, while others have been hell bent on tearing it apart.

Pulitzer Prize winning presidential historian and author of “Leadership in Turbulent Times.” Doris Kearns Goodwin, spoke to CNN’s Anderson Cooper recently about past triumphs and mistakes of other commanders-in-chief.

“We remain a deeply divided polarized nation, more than at any time in our recent history. Teddy Roosevelt once warned that the greatest threat to democracy would come when people in different sections, religions or classes are so cut off from one another that they no longer regard each other as common American citizens, they see each other as the other.”

Goodwin went on to say, “Old George Washington warned about the spirit of party and the spirit of sectionalism that was in his farewell address. We are seeing that right now,” adding, “to paraphrase Old Abe Lincoln, history will look with honor or dishonor on how the parties and how these two candidates handle this divided moment.”

So what does that all mean?

On one hand, you have President Trump claiming ahead of poll results that he had already won the election and him losing would only be due to fraud, stoking division.

On the other hand, former Vice President Joe Biden spoke of the importance of being president of all the parties and listening to the other side, not stoking division.

The responsible, mature transfer of power will be a real test of the Republican Party and its leaders. The last four years has been an embarrassment to the nation.

Most of the time when there is a crisis occurring, the leader’s handling of that crisis is the way they will gain or lose the confidence of the people.

James Buchanan, who was president before Abraham Lincoln, is ranked as the worst president of all time for his inept leadership during the years leading up to the Civil War.

President Herbert Hoover lost the faith of Americans when he said of the Great Depression that the “tide has turned,” when it had not.

And likewise, Donald Trump’s mishandling of COVID-19, mocking it at times and publicly denouncing the advice of one of the top medical experts in the world — Dr. Anthony Fauci– helped to sabotage his own campaign.

How does the US bounce back?

It’s all about leadership. At the time of President Lincoln’s second inaugural address, the United States had just come through a war where 600,000 people had died, and the country was split in two.  He focused his message on reconciliation, just six weeks before he was murdered.

“With malice toward none; with charity for all; with firmness in the right as God gives us to see the right, let us strive on to finish the work we are in; to bind up the nation’s wounds; to care for him who shall have borne the battle and for his widow and his orphan – to do all which may achieve and cherish a just and a lasting peace among ourselves and with all nations,” Lincoln said in one of his best speeches ever.

That is the message that Joe Biden is going to have to convey in order to get us moving in a different direction.

We need a common agreement.

“If the bully pulpit is used to mobilize that spirit within us, I believe that somehow we will get there. Nobody wants this level of division to be the way it is. It is only hurting us as a country; it makes us vulnerable to other countries, that’s what old George Washington warned against. If fear of the factionalism gets so great, then we will be vulnerable to influence by foreign countries.” Goodwin pointed out. “Our standing in the world needs to be improved. We need to show that we are common American citizens.  We were once isolationists, and before Pearl Harbor we began to come together and once we did, nothing could compete with the productivity of America. Business and government came together; a plane every four minutes, a tank every seven minutes, a ship every single day. What we could do with getting a vaccine together. We have to envision a different way from what we’ve lived in the last couple of decades, and we can!”

Can we? Only time will tell.