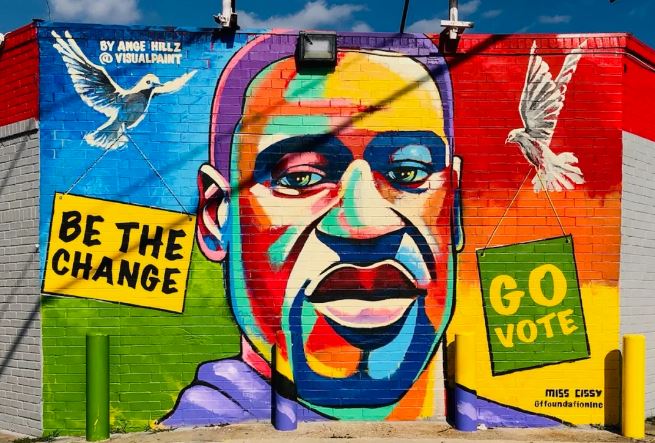 It seems like yesterday the nation watched in horror as George Floyd pleaded for his life on a Minneapolis street while being choked to death by police officers.

Floyd’s death has sparked a movement for equality and police reform.

Protestors and supporters, armed with balloons and flowers, gathered at the location of Floyd’s death to pay tribute to him on Oct. 12, what would have been his 47th birthday.

Others shared tributes on social media in his honor, including Senator Kamala Harris.

“Today would have been George Floyd’s 47th birthday. He should still be alive today celebrating another year with his family and friends. We need justice and to ensure that this never happens again—starting with banning chokeholds and creating a national standard for use of force,” Harris tweeted.

In Houston, Floyd’s hometown, city leaders unveiled a mural encouraging people to “Be the Change” and “Vote” for a better tomorrow.

“We should pay tribute to this family, who in their pain, is traveling not only in this state, but trying to reach to people who constantly say, ‘I don’t know if I’m going to vote,’” said Congresswoman Sheila Jackson Lee at the unveiling ceremony. “If you’re able, if you’re registered, you just can’t have that luxury.”

Other political leaders, including Councilwoman Carolyn Evans-Shabazz, and Commissioner Rodney Ellis, were also in attendance alongside Floyd’s family.

The mural, which is located at 3400 Holman Street in Third Ward, was created by artist Ange Hillz.

RIP George Floyd. Your death will not be in vain.