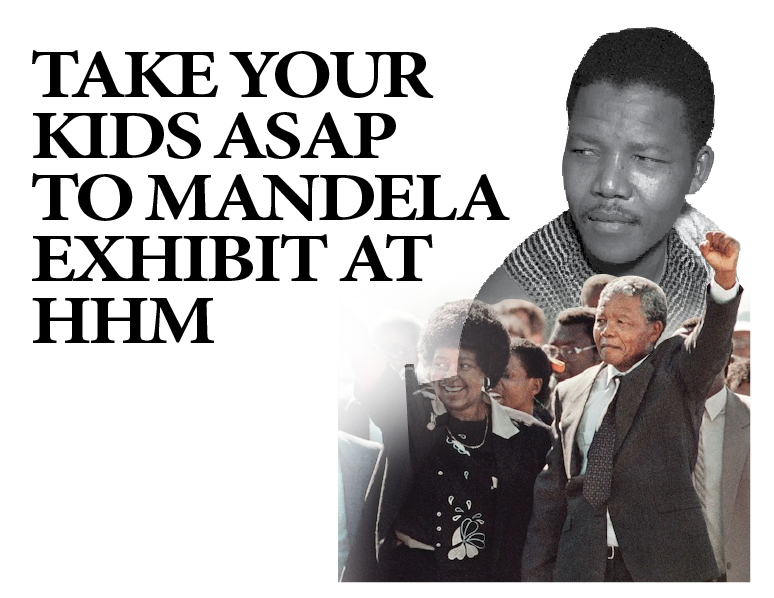 HOUSTON – During times like these, it is especially important to educate your children on the issues of race and the fight for freedom and civil rights, and a stunning and stirring exhibit is currently on display in Houston’s Museum District to help do just that. The Holocaust Museum Houston (HMH) is proud to be selected as the location to host the U.S. premiere of Mandela: Struggle for Freedom, which runs through January 3, 2021.

At HMH’s Lester and Sue Smith Campus located at 5401 Caroline St., visitors can experience the tiny cell where Nelson Mandela spent 18 of his 27 years in prison, take a stand in front of a giant 22-foot long by 9-foot tall armored vehicle, make a virtual protest poster on a digital light table, or enter a secret apartment for freedom fighters forced underground.

Among its many dramatic visual features, the exhibition replicates Mandela’s eight-foot by seven-foot prison cell. When entered, the cell becomes a digital theatre whose walls tell a story of repression and resilience. Other exhibition highlights include a 16-foot high “wall of laws” based solely on skin color, and original artifacts including police riot gear, tools of hard labor, letters written by Mandela, segregated swimming and toilet signs, and more.

“We’ve waited nearly two years to host this extraordinary exhibition,” said Dr. Kelly J. Zúñiga, CEO of Holocaust Museum Houston. “The fight for social justice and human rights is not over, as witnessed from recent unrest in the U.S. and around the world. While many young people have never heard of apartheid, the movement behind Mandela spread across nations. This exhibition shares an important piece of global human rights history, so its lessons can reverberate today with a new generation.”

Mandela was one of the most famous human rights defenders of the 20th century and the face of a movement against racial injustice that rocked the world. He was released from prison on February 11, 1990 and continued the fight to abolish apartheid. Awarded the Nobel Peace Prize in 1993 jointly with South African President F.W. de Klerk, Mandela was elected South Africa’s president the following year during the country’s first democratic elections. – AANI