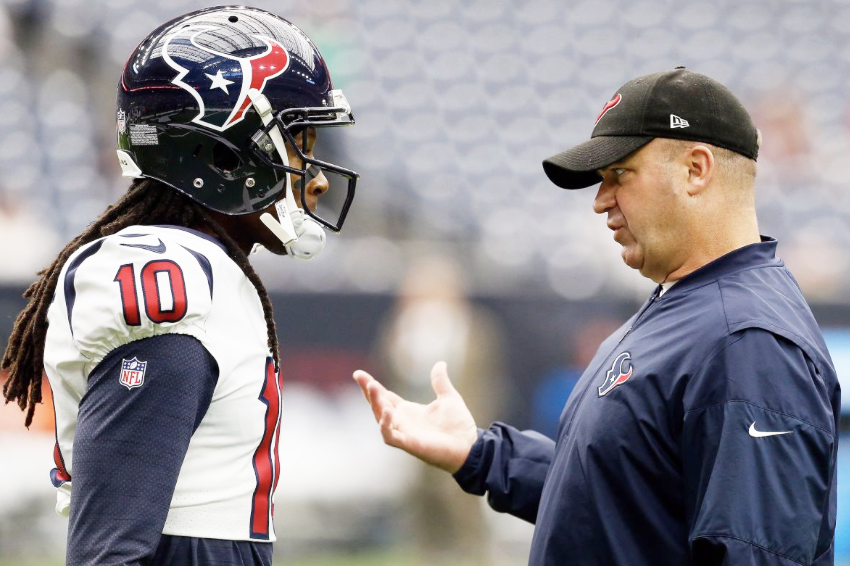 “My first instinct when I saw the terms of this trade was to worry whether Hopkins had lost a limb. My second instinct was to give the Texans side of this deal the same grade safety Tyrann Mathieu awarded his former team. This is a jaw-dropping, mind-bending, inexplicable trade for O’Brien, whose bizarre run as Texans general manager is going to be the subject of a 30 for 30 documentary one day,” ESPN’s Bill Barnwell wrote.

Barnwell said Johnson is now three years removed from his only productive NFL season. He missed almost the entire 2017 season with a wrist injury and has been a replacement-level back over the last two seasons.

So what’s really going on?

Comments after the trade have suggested Hopkins wants a new contract and that there was friction between O’Brien and his star receiver, but still, Barnwell says there’s no way O’Brien can settle for a mid-second-round pick, let alone simultaneously sending a pick swap to acquire a distressed, underwater contract.

“Hopkins is a franchise wide receiver in a league in which teams like the Jets, Colts, Raiders and Dolphins all have significant cap space and a need for a star wide receiver,” Barnwell added.

Irvin said the coach made those comments in a meeting in which he was supposed to hash things out with Hopkins, according to Arizona Sports.

But Hopkins tweeted on March 18 that Irvin’s comments — or what Irvin took out of a conversation the two had— were blown out of proportion.

“This is being blown way out of proportion. As I’ve said before, I enjoyed and am proud of my time with the Texans. I have the utmost respect for Coach O’Brien and that will not change. Now, I’m ready to play for the Cardinals,” tweeted @DeAndreHopkins.

“I tried to pull it out of (Hopkins) like, what happened? What happened here, man?” Irvin said on ESPN’s Get Up. “There’s no way they give away one of the best receivers in the NFL for a ham sandwich like they did. He kept the high road on me. He said, ‘Michael, I’m happy about where I’m going.’ He left it there,” @michaelirvin88 shared.

Irvin said Hopkins opened up to him about what transpired between he and O’Brien. It was basically a power struggle.

“In that meeting, he started the meeting telling DeAndre Hopkins this — which blew my mind when DeAndre told me this — he told DeAndre Hopkins the last time I had to have a meeting like this was with Aaron Hernandez,” Irvin said.

O’Brien was quarterbacks’ coach and then offensive coordinator for the Patriots when Hernandez played for New England in 2010 and 2011.

That’s a far stretch — for many — because Hernandez was a convicted murderer who ended up committing suicide and Hopkins does not have a history of any legal troubles.

“From there, the meeting just deteriorated,” Irvin explained. “He got into talking about DeAndre Hopkins — ’cause DeAndre Hopkins has a few kids and from different women — he told DeAndre that he didn’t like that he has his baby mamas around sometimes. From there, I think the relationship just went bad.”

Hopkins has spent his entire NFL career, seven years, with the Texans. He has been named a first-team All-Pro three times and has made four Pro Bowls.

Last season, Johnson started nine out of 13 games and only rushed for 345 yards with two TDs. He had another 370 yards on 36 receptions.

Many fans are mad as hell that Hopkins is gone. They are calling O’Brien stupid, a loser and racist, among other nasty names. O’Brien, we hope you made a good move. – AANI