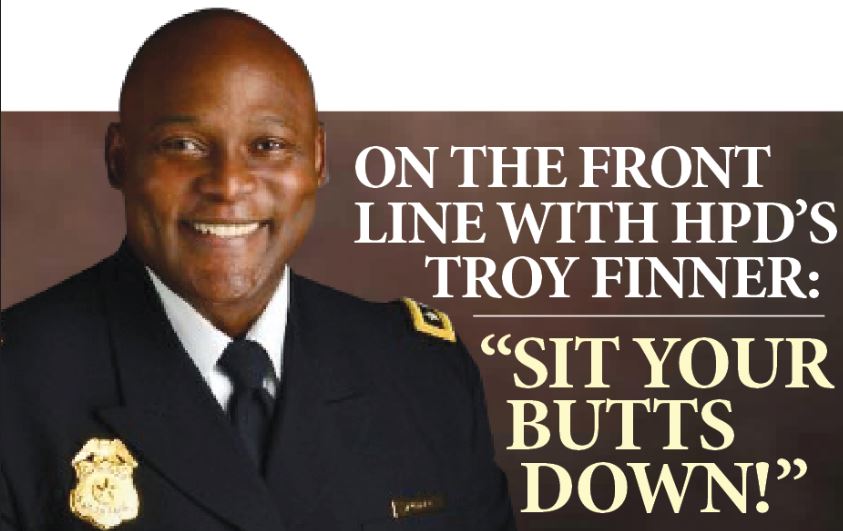 HOUSTON – As he has for the last 30 years, Troy Finner continues to “beat the streets” of Houston, and one thing is for certain, the executive assistant chief of the Houston Police Department has not been “beaten by the streets,” and is on a mission to help the city win the war of not only crime, but an unseen enemy that’s crept in.

The veteran officer is taking it personal.

“What people don’t realize is that I roll around this city by myself at all times of the day and night because I want to get a true picture of what’s out there,” Finner said.

The class of ’85 Madison High School graduate was born in Fifth Ward, but grew up in Houston’s Hiram Clarke area. One of six children of Leroy Finner Jr. and Nobia Finner, the father of five is known and respected — not only for his no-nonsense approach to law enforcement, but for his giving spirit and genuine care for the people he meets.

In one word – he’s “relatable.” Finner lost his oldest sister to Lupus in 2004, and two of his nephews to gun violence.
“I understand the pain of loss. It helps me to understand what families go through,” he said.

That’s part of the reason he is on the front line every day trying to ensure that Houstonians don’t experience anymore — potentially preventable — deaths from the pandemic that has the entire world on standstill.

“COVID-19 has put everybody on notice. God is trying to get everyone’s attention. No matter what neighborhood you live in, what race you are, what religion you are, it affects us all,” Finner said.

Finner applauds the work of our local leaders who have been working around the clock, arm in arm, to keep everyone safe.

“Let me commend Mayor Sylvester Turner, he’s been through so much with other crises. He’s not a rookie at this and is doing an outstanding job,” Finner said. “And Sheila Jackson Lee, as she always does, has stood up tremendously getting more testing sites.”

But he’s most proud of the leaders he serves with every day. He calls them his “brothers.”

“I am proud to serve with Chief Art Acevedo. Never underestimate his love for law enforcement and love for people,” Finner said. “And my colleague, Executive Assistant Chief Matt Slinkard, what a great partner. We are the two #2’s under the chief.”

He praises the work of the other first responders on the front lines, while praying that conditions improve.

“The most difficult thing for me is seeing our brave firefighters, paramedics, law enforcement and medical teams in need,” he shared. “It’s the worst feeling in the world when you know we don’t have enough PPE [Personal Protective Equipment] for our people in the field. They were trained to save lives, but now their lives are at risk. They’ve continued to fight through it around the nation, and a lot of them have died.”

Finner said what’s more disturbing than the global pandemic, is the crime and lack of regard for human life while so many are struggling.

“Sit your butts down! Understand we all need to be together on this, practice social distancing and don’t be out here committing crimes,” he said.

Finner’s most recent heartbreak came when Jordan Allen Jr. was shot and killed in southwest Houston. The 5-year-old was on his apartment balcony with his family, filming a Tik Tok dance video, when he was struck by a stray bullet.

“Let me tell you, his mother, what a strong young woman,” Finner said. “While she is under the shock of losing her son and knowing she can’t properly bury him in a larger homegoing celebration due to Coronavirus, she has so much spiritual maturity. She told me, ‘God is going to get me through this. I believe in God and I know that my son’s death is going to help other people in some kind of way.’ If you want to look for hope, That’s it.”

Finner said that Jordan’s father is also a strong and proud man. The family is law-abiding and was not doing anything wrong when they became victims.

Even in the darkness, there are many who are continuing to show what #HoustonStrong means.

“You do have some people – it’s just in them — who won’t comply, and you have to get out there and threaten them with tickets, but the great majority in our neighborhoods are complying,” Finner explained. “People are scared, but we know how to get through tough times. People in Houston are very hard working and proud. We don’t give excuses; we continue to get up and fight.”

As always, African-American News&Issues asked what advice Finner wants to share with the youth.

“I would tell young males to pay attention to who you are hanging with, your location and the time of which you are there. I call it the triangle,” Finner said. “If you are at the wrong place, at the wrong time of day and with the wrong people, it could end up deadly. You can take away any part of that and it could be alright, but when all three get together, not good.”

And his philosophies about life?

“Just try to help somebody every day. Give somebody a hand up — that empowers a person, not a handout — that does not get them to the place where they need to be,” he said. “For me, it’s not about my title, it’s about the relationships I have with people. When I came to this department, I came as Troy Finner, and when I leave, I will leave as Troy Finner.”