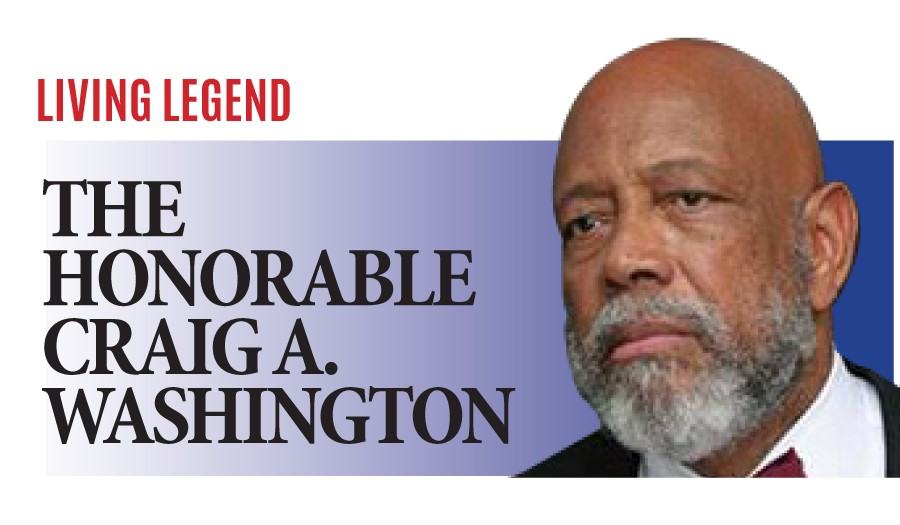 HOUSTON – Craig A. Washington was born on October 12, 1941, in Longview, Texas. He attended Brock Elementary School in Houston, Fidelity Junior High School, then Fidelity Manor Senior High School in Galena Park from which he graduated in 1958. Some of his high school activities included membership in the Student Council, and participation on the track, football, basketball, tennis and band teams.

Washington attended Prairie View A&M University, graduating with a Bachelor of Science in biology in 1966. He went on to attend Texas Southern University Law School from 1966 to 1969, graduating number one in his class, with honors. While in law school, he was Captain of the Moot Court Team (1967-69), President of the Student Bar Association (1968-69), and Research Assistant to the Dean of the Law School (1968-69). Washington received several awards and was consistently on the Dean’s List.

In 1970, he left the University to enter private law practice. He was the founding partner of Washington & Randle (later Washington, Lampley, Evans & Braquet), in Houston.

He was elected to the 63rd Legislature in 1972 to represent the 86th District of Harris County. Texas Monthly selected him one of the Ten Best Legislators three times: in 1973, 1979 and 1981. The August 1979 issue of Texas Business cited him as “being proficient in passing or defeating legislation,” the May 1980 issue of Texas Business referred to him as smart, well liked, and respected. Houston City called him Houston’s best legislator in its July 1981 issue and praised him in a feature story in the December 1981 issue.

In November 1982, Washington was elected to State Senate District 13 for the 68th Legislature. He was the second Black to have served in the Texas State Senate since Reconstruction. His senate district included parts of the Fifth Ward, the Heights, Montrose, Fourth Ward, Third Ward, the Hermann Park area, the Texas Medical Center area, Meyerland, Sunnyside, South Park, Westbury, the far south side of Harris County, and the northern edge of Fort Bend County. In 1985, the State Bar of Texas honored Washington as Outstanding Criminal Defense Lawyer of The Year.

Washington was elected to the U.S. House of Representatives to represent the 18th Congressional District following the tragic death of his friend, Congressman George Thomas “Mickey” Leland. He was first sworn in as a member of the United States House of Representatives when the 101st Congress reconvened on January 12, 1990. He was re-elected in November 1990 and November 1992. He eventually was defeated by Sheila Jackson Lee and departed Congress. He moved on to maintain law offices in Houston and Bastrop, also serving as counsel to law offices in Fort Worth, Lufkin, McAllen, and Odessa, Texas.

Washington was well known for his consistent support of civil rights and civil liberties and for his efforts to increase the participation of women and minorities in the political process. Highlights of his legislative career include passage of bills creating the Texas Department of Aging, increasing monthly payments to recipients of Aid to Families with Dependent Children (AFDC), limiting state investments in businesses involved with South Africa, addressing the needs of people with disabilities, and coordinating Texas’ fight against AIDS.

Washington is a father of five, and is also a proud grandfather.