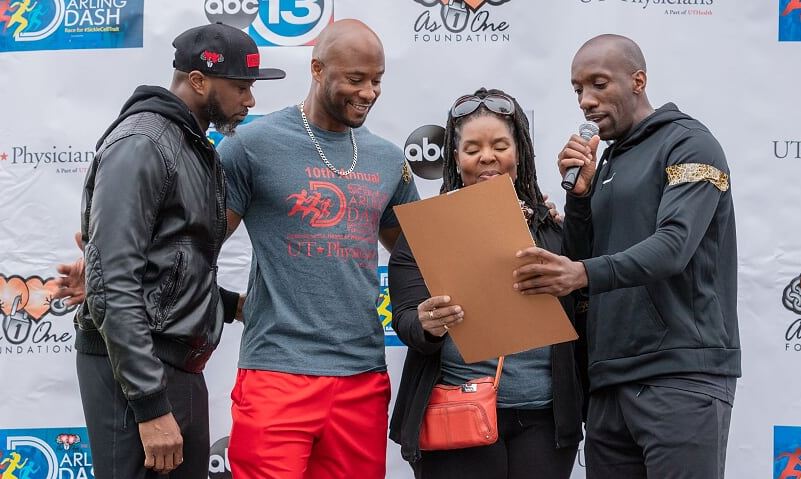 HOUSTON – More than 300 runners and walkers crossed the finish line in Stude Park on Feb. 23 to educate the public on the dangers of Sickle Cell Trait (SCT). They participated in the 10th annual Darling Dash 10K/5K/1K Race for #SickleCellTrait, presented by UT Physicians and hosted by local nonprofit, As One Foundation (AOF).

For more than 10 years, AOF has been educating student-athletes, coaches, teachers and parents about the effects of SCT.

“I started this foundation to honor my brother’s memory by educating others about his death from SCT,” says Devard Darling, founder of AOF. “Over the past 10 years, we’ve been able to not only educate people, but we’ve also provided free Sickle Cell screenings across Houston and the nation. The funds raised this year will allow us to go to local schools with our Operation Hydration program and inform coaches and young athletes on the effects of SCT.”

Darling, a former Houston Texan, founded AOF to honor his twin brother, Devaughn Darling, who died from complications of SCT. The brothers were on football scholarships at Florida State University when a rigorous football practice left Devaughn dehydrated and exhausted. Before his death, the twins didn’t know they had the trait. SCT has been classified as one of the top four non-injury killers of collegiate athletes. Sickle Cell Trait is not a disease, but having it means that a person has inherited the sickle cell gene from one of his or her parents. Risk factors for people living with SCT are dehydration, exertion and elevation. Primary prevention for an SCT event is warming-up, hydrating and resting.

To support the As One Foundation, visit www.asonefoundation.org. – AANI