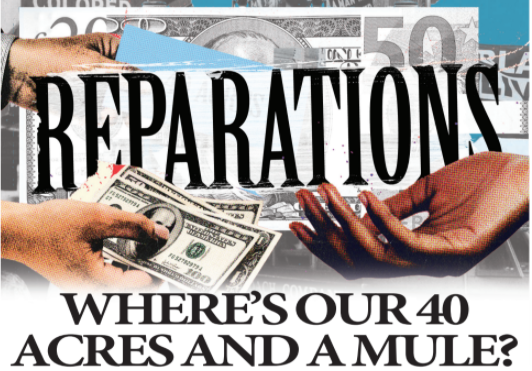 Have you ever heard the phrase, “40 acres and a mule?” If you have, depending on your age and wisdom, you may or may not know what that means. The saying is tied to “reparations,” which is what many African Americans feel is owed to them by the government for slavery, and rightfully so.

REPARATIONS is defined as “the making of amends for a wrong one has done, by paying money to or otherwise helping those who have been wronged.”

If you think of that term in modern day, you could compare it to a city or state paying an innocent person for a wrongful imprisonment. But how do you pay someone back for the greatest atrocity known to mankind — slavery — which had generations of our people suffering back breaking servitude, beatings, rapings, and separations of families who still have never found each other?

Some say it is simple — PAY — especially with the wide economic gap between Blacks and Whites in this country, with Blacks still doing twice the work for half the pay, in addition to other disadvantages in education, purchasing homes, starting businesses and the inability of passing down generational wealth.

THE FIRST SLAP IN THE FACE

As the Civil War was winding down, Union leaders gathered a group of black ministers in Savannah, Ga. with the intention of helping the newly-freed slaves in the area.

It was announced that Gen. William T. Sherman’s Special Field Order 15 set aside land along the Southeast coast so that “each family shall have a plot of not more than forty acres of tillable ground.”

That plan later became known as “40 acres and a mule.”

All was settled and it appeared the freed slaves would get a fresh start, but after President Abraham Lincoln’s assassination, President Andrew Johnson reversed Sherman’s order, giving the land back to its former Confederate owners. AND TO ADD INSULT TO INJURY – the SLAVE OWNERS RECEIVED REPARATIONS for having to give up their slaves.

HOW MUCH IS OWED?

One calculation by Thomas Craemer, a professor of public policy at the University of Connecticut, multiplied the “prevailing market wage” by the number of hours enslaved people worked (assuming a 24-hour work day) between the years 1776 and 1865. That model, calculated for 2019 at 4%, 5% and 6% interest rates, works out to $16.4 trillion, $17 trillion and $17.7 trillion, respectively.

HAS IT BEEN DONE BEFORE? YES!

Through the Civil Liberties Act of 1988, the government admitted to a litany of wrongdoings in its internment of Japanese Americans during World War II. As part of a reparations package, the government paid $20,000 to every living survivor of the internment camps and issued an apology that acknowledged a “grave injustice” that was “motivated largely by racial prejudice, wartime hysteria, and a failure of political leadership.” In total, $1.6 billion was paid out to more than 82,250 eligible claimants. Adjusted for inflation, that figure would top $3.5 billion in 2020.

So will they do this for Blacks?

Many politicians agree it is time to do the right thing, in some form or fashion.

Vice presidential hopeful Kamala Harris declared in April 2019 she supports reparations and Andrew Yang said in an interview that he supports HR40, the Commission to Study and Develop Reparation Proposals for African-Americans Act, sponsored by our own Rep. Sheila Jackson Lee.

So should we still want the “40 Acres and a Mule” promised to us? Yes. Will we ever see it? We will let YOU answer that.