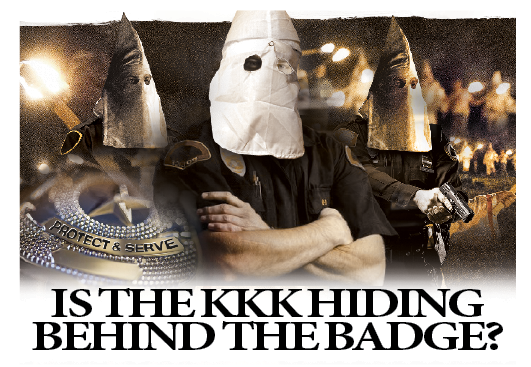 Just because you do not see something, does it mean it does not exist? The ugly face of racism is live and in living color, and is hiding in plain sight every day.

Yes, racism is alive and well in America, and its rearing its ugly head more as the days go by, especially under the current administration which is telling racists to “standby” and be ready for action.

The comfort of killing Blacks is at an all-time high, and the arrogance of a badge is allowing them to do it.

Cops have been attacking and killing Blacks from the start, it’s nothing different about that, but they’ve slowly tucked away their pointed KKK white sheets following the Civil Rights era. Today, they have re-emerged, cocky and more dangerous than ever, because the United States has taken a shift as leadership in every legislative branch continue to get exposed — secret recordings being leaked, old “Black face” photos resurfacing and Confederate flags waving proudly from dusty pickup trucks.

Do you even know the origin of law enforcement — or police?

In general, throughout the 19th century and beyond, the definition of public order — that which the police officer was charged with maintaining — depends on whom you ask.

Policing can be tracked back to Colonial America, where towns relied on a “night watch” in which volunteers signed up for a certain day and time, mostly to look out for fellow colonists engaging in prostitution or gambling. (Boston started one in 1636, New York followed in 1658 and Philadelphia created one in 1700.)

That origin would be for the good and safety of townspeople, but when did the brutality arise? Simply put, that can happen when you give any insecure person a position of power, but when you add flat-out racism in the mix, it’s a deadly explosion.

Have you ever heard of slave patrols?

Slave patrols called patrollers or paddy rollers, by enslaved persons of African descent, were organized groups of armed white men who monitored and enforced discipline upon black slaves in the antebellum U.S. southern states. The slave patrols’ function was to police enslaved persons, especially those who escaped or were viewed as defiant. They also formed river patrols to prevent escape by boat. Slave patrols were first established in South Carolina in 1704, and the idea spread throughout the 13 colonies, lasting well beyond the American Revolution.

As the population of enslaved black people boomed, especially with the invention of the cotton gin, so did the fear of resistance and uprisings by the enslaved. Their biggest concern were the slaves being held against their will on the plantations. Initially, incentives were offered to whites such as tobacco and money to urge whites to be more vigilant in the capture of runaway slaves. When this approach failed, slave patrols were formally established. Laws were put into place to regulate the activities of both Blacks and whites. Black persons were subjected to questioning, searches, and other harassment. Slaves who were encountered without passes from their white “master” were expected to be returned to their owners, as stated in the slave code. Punishment for runaway slaves, such as whippings and beatings, could be expected. More than floggings and beatings, however, slaves feared the threat of being placed on the auction block and being separated from their families. If caught by patrols and returned to their masters, being placed on the auction block was an option for masters who no longer wanted to deal with their “non-compliant” slaves. During these times, slaves were often neglected and mistreated despite having permission to travel.

Slave patrollers had their own characteristics, duties, and benefits, apart from slave owners and overseers. Patrollers were often equipped with guns and whips and would exert force in order to bring slaves back to their owners.

At times, Blacks developed many methods of challenging slave patrolling, occasionally fighting back violently. The American Civil War developed more opportunities for resistance against slave patrols and made it easier for enslaved people to escape. Slave patrol duties started as breaking up slave meetings. These slave meetings occurred on holidays, in which they would plan revolts and uprisings. Eventually, slave patrols expanded to be year-round, not just on holidays. Slowly, new duties and rights of patrollers became permitted, including: “apprehending runaways, monitoring the rigid pass requirements for blacks traversing the countryside, breaking up large gatherings and assemblies of blacks, visiting and searching slave quarters randomly, inflicting impromptu punishments, and as occasion arose, suppressing insurrections.”

Do we need to go on? We think you can see what happened.

The blood-thirsty power of trying to control the Black man — and developing LAWS in which empowered them to do so — came when we were dragged in chains to this country.  Now the chains have been replaced with handcuffs, the whip has been replaced with a gun…and the “slave patroller” is now called an “officer of the law.”

No matter how you look at police, just like our ancestors viewed them, they are nothing more than the cowards trying to capture us for the “paddy wagons” and trying to separate us from our families…by either imprisonment or death.