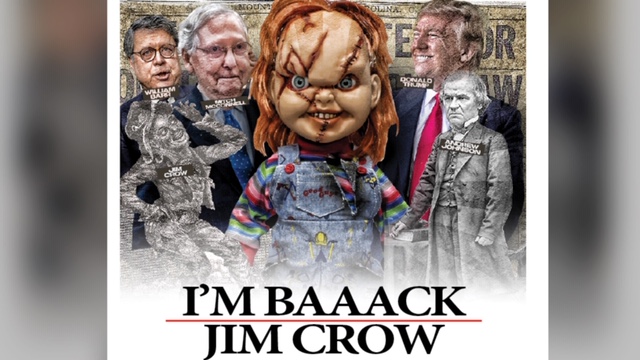 HOUSTON — Racism is not “child’s play,” and President Donald Trump — no matter how juvenile he acts — is nothing to play with, nor is this election. But before we let you go about the business of your day (some blind to what is happening right before your eyes) we must take you through a walk in time to show you how ignorance of the past dooms you to ALLOW others to SNEAK a REPEAT on you.

Indulge us for a moment — and educate yourself — then run for your lives to the polls this November and do the right thing.

“This is a country for white men, and by God, as long as I am President, it shall be a government for white men,” Andrew Johnson said after becoming the 17th president following Abraham Lincoln’s assassination.

Even though Lincoln issued the Emancipation Proclamation, freeing all slaves in Confederate states on Jan. 1, 1863, and even though Congress ratified the 13th Amendment abolishing slavery, nothing really changed in the South.

Just as there were cyclical CHANGES IN PRESIDENTS, there were hard-fought CHANGES IN LAWS, yet CONTINUED MANIPULATION of the Southern negroes who were REMOVED FROM CHAINS, but REMAINED IN BONDAGE.

During the Reconstruction era, moderate Republicans had hoped provide protection for negroes in the South, but no protection was granted. PRESIDENT JOHNSON WAS A KNOWN WHITE SUPREMACIST.

In March 1866, both houses of Congress passed a landmark Civil Rights Bill that protected the rights of American citizens without regard to race, but Johnson vetoed the bill. Johnson was thought of as stubborn, self-righteous, rigid and considered the “worst person to become president accidentally.” DOES THIS DESCRIPTION REMIND YOU OF ANYONE???

The Republican Party overrode Johnson’s veto and America has its first Civil Rights Act, but that was not enough. Changes were needed for the constitution.

The ratification of the 14th Amendment made negroes full citizens of the United States. But again, they still weren’t “free” in the true sense of the word.

The Southern legal system became an instrument of intimidation. Louisiana, Mississippi, South Carolina, Florida and Texas passed laws that prohibited freed men from any work except as field hands. The laws were called “Black Codes,” which were essentially slavery without the chains, and a travesty of the freedom that the negros had acquired.

Black Codes made it illegal for negroes to buy firearms, purchase liquor and restricted them from buying or renting land. Negro children could be seized from poor families and forced to work in the fields. If a negro man had no job, he could be jailed and auctioned to a planter for his labor. Negroes could not engage in any trade or business other than farm work. The land “promised” to the freedmen was returned to white Rebels, and landowners even refused to pay negroes money they were owed for work. This manipulation sentenced negroes to a landless existence for generations to come.

Newly freed slaves wanted LAND and tools to work the land, knowing without their own property, there would be no true freedom. They wanted to build their own schools and communities.

In addition, they wanted the right to vote!

The 14th and 15th Amendments guaranteed Blacks the right to vote and due process of law, however many whites chose not to acknowledge the new laws. Some whites felt they would always be superior, and negroes needed to know their places.

Whites, who were really in FEAR OF THE NEGRO, were hell bent on suppressing negroes by beatings, lynchings and murder. Nathan Bedford Forest, the first Grand Wizard of the Klu Klux Klan, led many of these acts of terror.

Some negroes remained fearless and because of their quiet “stubbornness” to be defeated, the highest courts in the land had to pay attention – either good or bad. 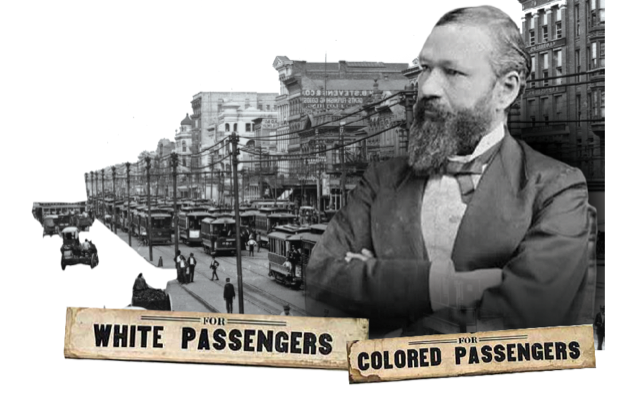 Decades before Rosa Parks refused to give up her seat on a Montgomery, Alabama bus, a French-speaking Creole negro man named Homer Plessy sat in a “whites only” railroad car in Louisiana and refused to get up. His arrest and conviction led to the 1896 Plessy v. Ferguson Supreme Court battle, but things did not turn out as one would expect — RACISM was still in play.

The court decided that the railroad company did not violate the Equal Protection clause of the 14th Amendment, and the “Separate but Equal Doctrine” came to be. The doctrine stated that as long as there were equal facilities, it was OK to separate the races. This slap in the face just allowed the South to continue dehumanizing negroes with the Jim Crow Laws, which made us second class citizens.

Jim Crow separated citizens on the street cars, in bathrooms, restaurants, etc., and negros were not allowed to use water fountains or anything else whites could think of.

Jim Crow Laws were also used to disenfranchise negroes, using specific tactics to deny them the right to vote. One in particular was implementing a poll tax, which many negroes could not afford. Another was a White Primary, in which you had to be a white person to vote. And finally, a literacy test, which many negroes could not pass because they had been prohibited from learning how to read and write during slavery.

You see, Jim Crow Laws were a “legal loophole” backed by the Supreme Court which infringed upon our rights, but no matter what, Blacks continued to fight. The revolution was led by young negro leaders.

The needle began to move more when President Harry S. Truman got involved.

Truman began to meet with the National Association for the Advancement of Colored People (NAACP) and take its issues seriously. Truman supported negros, even though he was cautioned it could hurt his chance for re-election. He was victorious, however, and his win signaled that the ideals of the American people were shifting.

In a move for equality, Truman signed Executive Order 9981, which racially integrated the military. There would no longer be a “division” of rights for soldiers who “equally” put their lives on the line.

There was also a need for change in education, and a young negro girl lead the way.

In the town of Farmville, Virginia, Barbara Johns decided to lead a student walkout at her school, demanding better resources. Her entire class supported her despite the board threatening the children’s parents with imprisonment and job loss. This situation caught the attention of the NAACP and the case, combined with others, eventually led to the historic Brown v. The Board of Education, which ended segregation in schools.

It would take a lifetime to discuss the historic struggles of NEGROES –> COLOREDS à BLACKS –> AFRICAN AMERICANS.

We know the names of Marcus Garvey, Malcolm X, Dr. Martin Luther King Jr. and our recently-departed Congressman John Lewis, but do you REALLY UNDERSTAND the LAWS that were put in place these leaders were risking their lives to change?

Our current president sleeps at 1600 Pennsylvania Avenue, and when he is awake, he sups and dines with his “flunkies” as they find ways to bend and twist the rules for self.

Many Republicans who morally oppose his views dare not challenge him for fear of losing their seats.

He publicly calls Black peaceful protesters “thugs,” separates Mexican children from their families , wants to sink billions into building a Border Wall, allowed a deadly virus to enter the United States when he had knowledge early on, and has caused more working Americans than ever before to now rely on food bank drives, unemployment and are losing their homes daily. A $1,200 stimulus payment “ain’t gonna fix that” no matter how many times he signs his name on the U.S. Treasury check.

How does he get away with it all? Just as with the Jim Crow Laws, by “legal loopholes.”

Are you ready to go back in chains? Keep sitting at home, you may see them sooner than you think. Or wait a minute, you already are…the COVID-19/Coronavirus Trump failed to protect us from already has us “segregated.” THINK ABOUT IT!