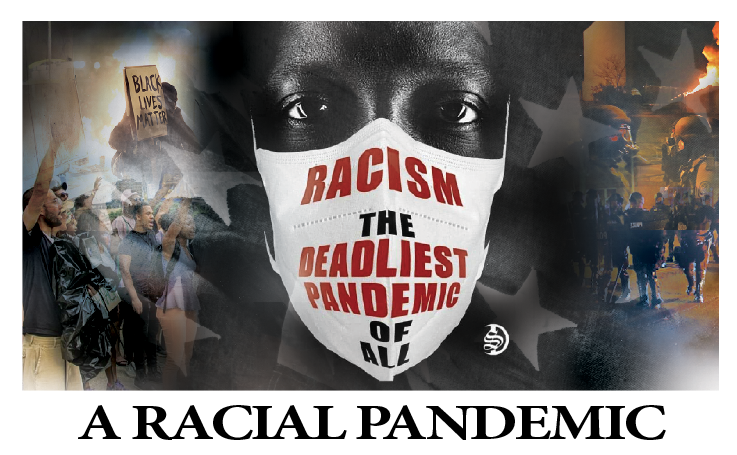 A pandemic is defined as “an epidemic occurring worldwide, or over a very wide area, crossing international boundaries and usually affecting a large number of people.”

It is generally referring to a “medical disease,” like cholera, the bubonic plague, smallpox, and influenza from the past, or our current COVID-19/ coronavirus crisis, but there is a certain disease that is spreading like a virus across the country — in fact the world — and there is no medical vaccine or cure for it. The disease is RACISM, and it is infecting and affecting our households, our lives and our souls.

A RACIAL PANDEMIC has swept the globe, and primarily in America, Blacks are being hunted and targeted by police, white Supremacists and even their own neighbors and “Everyday Joes” who are no longer cloaked in disguise, but are boldly letting the world know that Black people are prey for no other reason than the color of their skin.

We could say that police brutality is at an all-time high, but that is honestly not true. Police brutality against Blacks has ALWAYS been high, we just could not prove it then as much as we can now, thanks to technology with cellphone videos and social media.

Now, the brutality is on display for the world to see, even though many politicians and judges still turn a blind eye to it, refusing to hold those accountable in the deaths of Blacks.

We scold those who protest and burn down buildings, not realizing that many are simply “sick and tired of being sick and tired” after seeing one officer after another, and one racist after another, get a slap on the wrist after callously killing Blacks with no consequences. The officers who beat Rodney King got away with it, George Zimmerman walked free after stalking and killing Trayvon Martin, and the list goes on and on.

“George Floyd, dead after a police officer knelt on his neck. Ahmaud Arbery, fatally shot while on a jog. Breonna Taylor, shot to death by police raiding her home. Eric Garner, Philando Castile, Trayvon Martin — the list is far too long and ever growing,” Shullman said. “If you’re black in America — and especially if you are a black male – it’s not safe to go birding in Central Park, to meet friends at a Philadelphia Starbucks, to pick up trash in front of your own home in Colorado or to go shopping almost anywhere.”

Shullman echoed our sentiments that racism has swept across the globe like a deadly virus.

“We are living in a racism pandemic, which is taking a heavy psychological toll on our African American citizens. The health consequences are dire. Racism is associated with a host of psychological consequences, including depression, anxiety and other serious, sometimes debilitating conditions, including post-traumatic stress disorder and substance use disorders. Moreover, the stress caused by racism can contribute to the development of cardiovascular and other physical diseases,” she said.

“The American Psychological Association urges those who are experiencing trauma in the aftermath of these tragedies to practice self-care. Connect with family, friends and other community support people, talk about your feelings and limit your exposure and that of your children to news media and viral videos. Seek professional help if you need it,” Shullman advises.

While turning off news media and not watching viral videos may be a way to protect our psyche, who or what is protecting our civil liberties and LIVES?

The answer is to stay vigilant and stay holding our elected leaders accountable. We need to continue protesting and demanding justice. We need to educate our children, build up our communities, BUY BLACK to create and keep wealth within our neighborhoods, we need to buy homes and invest in real estate and black businessowners need to hire more black people. We all need to continue to wage war against drugs and drug dealers on our streets, eat better, and take better care of our overall physical health.

Blacks need to stop repeating quotes by famous poets like Maya Angelou and practice what we preach, and REALLY live by the mantra “it takes a village to raise a child” and get more involved with the children and teens in our neighborhoods. The more we get to know one another, the less we are to harm one another.

So, how do we fight a RACIAL PANDEMIC? We know there is not a vaccine for that, the only way is to strengthen ourselves. The more we BUILD and OWN our COMMUNITIES, and the more we BUILD our HEALTH and WEALTH, the less chance the ENEMY has of coming in.

More pride and reliance in your OWN PEOPLE and less reliance on the WHITE MAN is the only way UP and OUT.