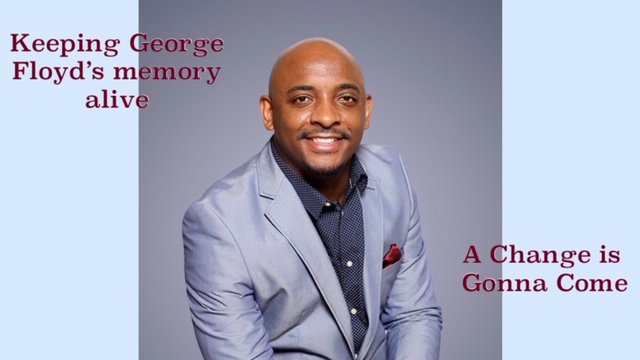 HOUSTON — The body has been buried, the movement is far from over and a song written by a local worship leader is sure to live on for ages, signifying the birth of a new generation of fighters.

George Powell, married father of one, is an Austinite who’s been living in Houston for the last 10 years. The national recording artist has made it his mission to use his gift of song to keep George Floyd’s name alive. Early June, Powell released his rendition of Sam Cooke’s “Change is Gonna Come,” which told the story of Floyd, a Houston man who was killed by Minneapolis police in broad daylight, sparking protests around the world. Within days, the song went viral, gaining over 2.8M views and over 80K shares.

African-American News&Issues spoke with the Fallbrook Church worship leader, speaking about the movement, and personal experiences with racism.

Q: When you first saw the video, how did you feel as a black man?

A: I actually could not watch it because I think, immediately, I connected and said, ‘that could have been me.’ When I finally watched the video, it took me into a deep emotional state because you literally watched the life leave him. He urinated on himself. How could any human being do that to someone, especially when people are begging people to stop? By the time I wrote the song over a week later, I had dealt with the anger. My wife actually told me I should sing that song. When I was singing the regular version and singing “I was born by the river,” I started to think about where George Floyd was actually from so I decided to change it up to make it more about his life.

Q: Your daughter is 7 years old, close to the age of George Floyd’s daughter, who says her daddy changed the world. Have you explained to your daughter about the racism in America?

A: We’ve not used black and white with my daughter. She goes to a predominantly white school, so we try to keep some of the innocence without getting into all the black and white. She’s not connected what happened to George Floyd completely, but she does know some of the history of how some white people have treated black people.

Q: Have you ever been called a nigger?

A: Not by a person of non-color. I don’t even know how I would respond.

Q: As a worship leader and a black man of faith, do you see a shift? Do you see what you sang? Do feel a change is really going to come?

A: I think I see the beginning of change. There have been plenty of times before when we’ve had marches, protests and riots, but now we have the world’s attention. George Floyd’s untimely death and the way he died, people and companies are now woke, like Starbucks and Raising Canes. We are finally seeing what I would consider the beginning of real change with people saying ‘Black Lives Matter’ in Mainstream America.

Q: Besides the beautiful song you wrote, what message would you like to share with George Floyd’s family?

A: Thank you for allowing us to be a part of your goodbye. Because the world was allowed inside the service, it helped our message and our movement.

Q: Message to the people?

A: Keep praying, keep the faith and keep our hope strong. We have more reason now to be hopeful than ever.

The video was shot at the official George Floyd mural in the neighborhood Floyd grew up in and illustrates the message that “Freedom” is still not equal for African Americans.