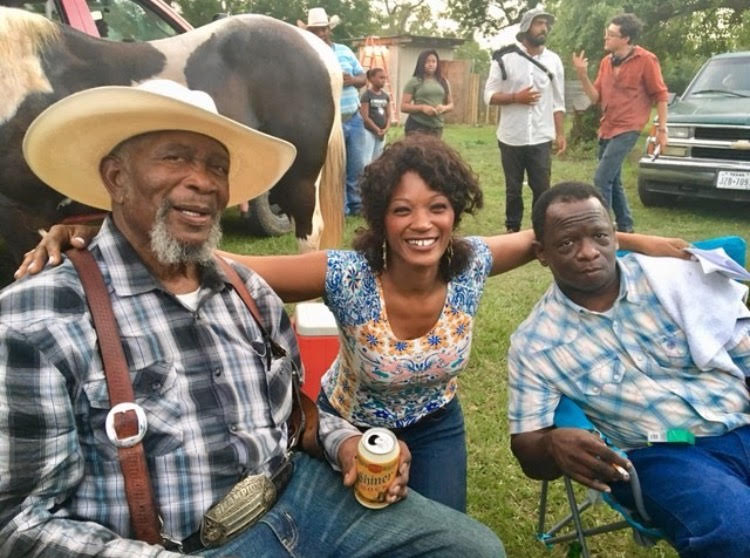 HOUSTON – “Rest in the Lord and wait patiently; trust also in him and things shall come to pass.” A quote of such value, sapphires and pure gold is one of many lessons that Houston actor and producer Troy Hogan has learned throughout his life and career.

A man of principle, faith, honesty and humility, Hogan grew up in a single-parent home where his mother played both roles, and also took care of her brothers and sisters. Through her drive, hard work and persistence, Hogan’s mother became an important figure in his life.

“She wouldn’t let up, she was tremendous on being relentless,” Hogan said. “As the middle child and the first sister of her family, she took care of her loved ones and myself as her only child. As I got older, I felt the necessity to take care of those I love and use the God-given talents to take care of my family.”

His deep-rooted faith in the Lord has kept him moving in the right direction.

“There’s a quote that goes, the devil don’t like me and he knows I feel the same,” Hogan said. “He knew I felt the same way when I got baptized. I always felt that things got rougher afterward because once you’ve dedicated yourself to the Lord, the devil finds every reason to attack.”

The South Park native graduated from Robert E. Lee High School in 1985—now named Margaret Long Wisdom High School—where he found his skill in acting, but didn’t realize it was his passion at the time.

“I didn’t, my high school teacher saw something in me my freshman year,” Hogan said. “I took the theater/drama class because that was the only elective I could choose.”

Hogan then went to Prairie View A&M University where he was a part of the Charles Gilpin Players Theater Troupe, and graduated with a Bachelor of Arts in Theatre in 1993. Hogan interned at the Alliance Theatre in Atlanta, Ga. under the mentorship of Tony Award winning Broadway and film director Kenny Leon.

Hogan worked in various Houston theatres including Main Street, the Alley, the Encore and the Ensemble. Hogan then traded in the big stage for the big screen.

This H-town actor is making major moves on our television screens playing in many films and TV shows like “Friday Night Lights” on NBC, “Mercy Black,” “The Highwaymen,” “Free State of Jones,” “Queen Sugar” on OWN Network and “Righteous Gemstones” on HBO.

Now, Hogan is currently working on a film that was shot in our own back yard. In a near-abandoned subdivision west of Houston, a wayward teen runs headlong into her equally willful and unforgiving neighbor, an aging bullfighter who’s seen his best days in the arena; it’s a collision that will change them both.

“Bull” is centered around 14-year-old Kris (Amber Havard), who destroyed her neighbor’s house out of youthful defiance. To make up for it, she is forced to help her neighbor, Abe Turner (Rob Morgan), an ex-bull rider scraping by on the Texas rodeo circuit, with errands at home and at his work, where she discovers her passion for bull riding. Yet, as Kris sets out to learn the dangerous sport, bad influences lures her back into defiant ways. Meanwhile, Abe struggles with the aches and pains of growing older and aging out of the only life he has ever known. Together, Kris & Abe forge an unexpected connection, helping each other see new possibilities and hope for the future before it’s too late.

Hogan plays Mike, a man of needs and a close friend of Abe, who owns a small farm ranch in north Houston, both of which were a part of the black rodeo scene.

“The bull is just as afraid as the human, he’s coming full speed, but he’s going to close his eyes,” Hogan said, quoting a line from the film. “You can’t have fear, no matter what’s charging toward you.”

To the fans of “Queen Sugar” and “Righteous Gemstones” who were looking for some insight on the upcoming seasons of the two shows, you’ll have to wait until they air again on your TV screens.

When asked about what words of advice to give to the aspiring actors, Hogan said, “Don’t try to make a name for yourself, do your job and be proficient at it, be confident and get out of your own way.”

He went on to dd, “There’s a motto I go by, be 1% better every day because by the end of the year, you’ll be 365% better than you were when you first started.”