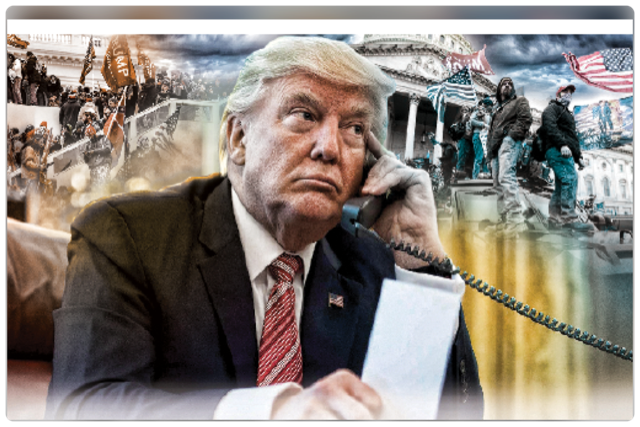 If nobody ever understood what White Privilege is, just look at what happened at Capitol Hill on January 6, 2021.

Chaos erupted in Washington D.C. Wednesday as lawmakers attempted to count the Electoral College votes certifying President-elect Joe Biden’s win. An angry and defiant President Donald Trump, still spreading lies and conspiracy theories, encouraged his supporters at a rally he was holding near the White House to storm the Capitol to object to the proceedings. He also tweeted that Vice President Mike Pence, who was presiding over the certification, “didn’t have the courage to do what should have been done to protect our Country and our Constitution.”

And like the servants they are, the protesters did what they were told, and took it up a thousand notches.

Guns had to be drawn as hundreds of Trump supporters pushed through barriers set up along the perimeter of the Capitol.

The protesters tussled with officers in full riot gear, with some calling the officers “traitors” for doing their jobs.

Demonstrators actually got into the building, forcing security to lock the doors to the House and Senate.

Lawmakers were told to duck under their chairs until they could be evacuated. Vice President Mike Pence also had to be rushed to safety.

What happened once the protesters got inside the building is one for the record books. Photos show White protesters standing on statues inside the building, one even placing a MAGA (Make America Great Again) hat on Gerald Ford’s statue, holding a Trump flag and posing for pictures. Others can be seen sitting at the elected officials’ desks, smoking E-cigarettes, feet propped up and making phone calls.

More photos show armed guards barricaded with lawmakers on the Senate floor, with a desk against the door trying to keep protesters outside, while pointing guns – but not shooting.

Imagine if they were Black. Like the Notorious B.I.G. said in one of his songs, “There’s gonna be a lot of slow singing and flower bringing,” because there would have been many funerals to attend.

In the streets outside the building, tear gas and pepper spray were deployed in an effort to bring the crowd under control.

Washington Mayor Muriel Bowser initiated a citywide curfew overnight, but that still didn’t make the defiant group back down.

Federal and local law enforcement were also investigating reports of possible pipe bombs in multiple locations in the area.

Slowly, a few Republicans finally spoke up, but most remain silent in fear of Trump retaliation.

Rep. Mike Gallagher, a veteran and supporter of President Trump, said the pro-Trump rioters storming the Capitol was “insane.”

He also sent a message to Trump saying….”Call it off. It’s over. The election’s over. And the objectors need to stop meddling with the primal forces of our democracy here.”

The president did send out a Tweet asking for everyone to remain peaceful, to which Senate Minority Leader Chuck Schumer sent a response Tweet back saying, “It’s a little late for that. Don’t you think?”

Sources say even when Trump’s own staff begged him to call off his protesters, he was reluctant, but eventually gave a backhanded speech, that really praised the supporters for their bad deeds.

“This was a fraudulent election, but we can’t play into the hands of these people,” Trump said in a released video. “We have to have peace. So, go home, we love you, you’re very special, you’ve seen what happens, you’ve seen the way others are treated that are so bad and so evil. I know how you feel but go home and go home in peace.”

We ask you again, what if Trump was Black? And more so, what if the protesters were Black?

Black people should clearly see that we can’t do what white folks do. If President Barack Obama would have done half of what President Donald Trump is doing daily, he would have been up under the jail house. What’s the difference? Trump is RICH and WHITE, and many Black people haven’t realized what BLACK POWER REALLY MEANS!

The president has been doing every disgraceful thing imaginable on his way out of the White House, and with less than two weeks to go to Inauguration Day, we haven’t seen anything yet!

And chances are, he will get away with it. Look at everything else he’s been doing.

At the beginning of the month, the “untouchable” president was caught on tape – once again -saying things that many say should never be uttered from the mouth of the leader of the free world.

He refuses to stop, it’s engrained in him and as a self-entitled White man, he and other whites like him are not playing by the textbook they wrote themselves; they are adding chapters to fit their own narratives.

Excerpts from a stunning one-hour phone call with Georgia Secretary of State Brad Raffensperger showed what appears to be the president bullying and threatening the elected official to “find” enough votes to tilt the 2020 election results.

“The people of Georgia are angry, the people in the country are angry. And there’s nothing wrong with saying that, you know, um, that you’ve recalculated,” Trump could be heard saying in the call, to which Raffensperger responded, “Well, Mr. President, the challenge that you have is, the data you have is wrong.”

Trump continued, saying, “So look. All I want to do is this. I just want to find 11,780 votes, which is one more than we have. Because we won the state. You should want to have an accurate election. And you’re a Republican.”

“We believe that we do have an accurate election,” Raffensperger said in response, to which Trump replied, “No, no you don’t. Not even close. You’re off by hundreds of thousands of votes.”

Trump even indicated to Raffensperger that he could get in legal trouble if he did not overturn the results. But like many of his other statements, that is false as no fraud has been found.

This bullying, while not surprising to anyone who has gotten to understand Trump and his tactics, has finally been publicized for his base of supporters to see – even if they still choose to deny it.

“This is the Emperor has no clothes,” said Margaret Hoover, Republican strategist and host of PBS’ Firing Line. “This is the moment where you see that the man who has been telling us that there are irregularities in the system that have created a false outcome of the election, caught on tape trying to create irregularities in the system to lead to his own re-election. There are no two sides of this story. This is the president of the United States undermining Democracy and this is the first time, thanks to modern technology, it was caught on tape.”

“I’m talking to constituents who are calling in between oxygen breaths in hospitals who are trying to stay alive during COVID-19, yet the president of the United States in the midst of this pandemic and swearing in of a new Congress to begin work on behalf of American people, made a call that is not only daunting, but frightening,” Jackson Lee said.

The Congresswoman went on to add, “It is frightening because the one thing we have to hold on to as Americans is this precious set of principles in the Constitution called Democracy. That’s what we have based our survival, our leadership, our presence in the world and what the president did was to badger and intimidate a state elected official to do something wrong.”

Political Analyst John Avlon likened the president to a gangster.

“He is a pathetic thug. He’s a mob boss attempting a shakedown caught on tape who elevates conspiracy theories over facts and tries to bully election officials,” Avlon said. “What he was caught doing was trying to deprive the voters of Georgia and the United States of a free and fair election, I believe our legal friends will say that is illegal under federal and state law.”

Avlon said Republicans who stand by the president and his illegal tactics should realize they are potentially destroying their reputations.

“Is this the man? Is this the man they are willing to trash the Constitution or our Democratic norms to support? Why?” Avlon asked.

It is a question many may never be able to answer.

The countdown is on until Joe Biden is sworn in as the 46th President of the United States. We will wait, like the rest of America, to see what Trump will do next. Bowing out gracefully is not a skill he was taught. And by looking at what unfolded this week when White people took siege of the Capitol – and one woman being shot and killed – Trump is willing to risk lives for the sake of his bruised ego.