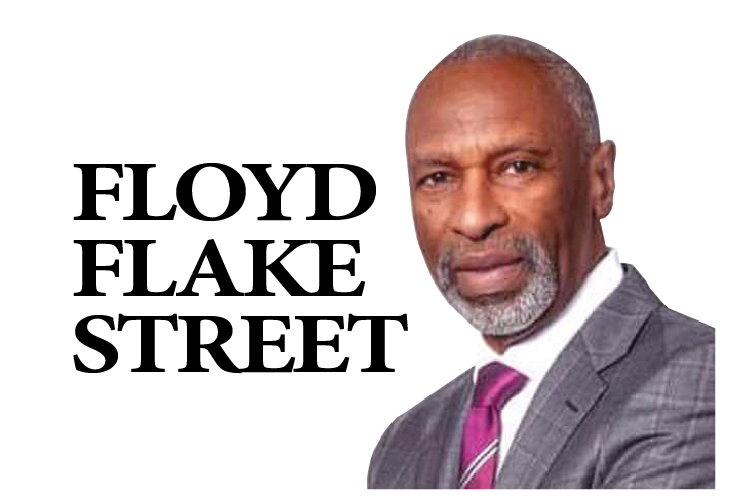 HOUSTON — The historical Acreage Home community is boasting with pride as one of its “sons” is being honored in New York City.  There will be a ceremony held Oct. 3, renaming a street after former Congressman Floyd H. Flake.

Flake served as a member of the United States House of Representatives from 1987 to 1997.

Born in Los Angeles, California, Flake grew up in Houston, Texas (Garden City Park) as one of 15 children of Robert Flake, Sr. and Rosie Lee Johnson-Flake. During his childhood, he was influenced by his parents’ Christian moral beliefs. After high school, he obtained his BA degree from Wilberforce University in Wilberforce, Ohio, becoming the first member of his family to graduate from college.

He served as a social worker and then worked for Xerox as a marketing analyst. Flake next worked as Director of Student Affairs at Lincoln University, PA, and subsequently dean of students and director of the Martin Luther King, Jr. Afro-American Center at Boston University. In 1976, he was asked to head the Allen African Methodist Episcopal Church (now The Greater Allen Cathedral of New York). Under Flake’s leadership, the church grew from having about 1,400 members to over 23,000 parishioners.

Flake is the senior pastor of the Greater Allen A. M. E. Cathedral of New York in Jamaica, Queens County, New York City. According to the published marketing message, “The church and its subsidiary corporations operate with an annual budget of over $34 million. The church also owns expansive commercial and residential developments; a 750-student private school founded by Flake and his wif, and various commercial and social service enterprises, which has placed it among the nation’s most productive religious and urban development institutions. The corporations, church administrative offices, school, and ministries comprise one of the Borough of Queens’ largest private sector employers.”

In 1986, he defeated incumbent Democratic congressman Alton Waldon in the primary and was elected to the 100th United States Congress from the 6th New York Congressional District. He remained in the House of Representatives until 1997, when he resigned in the middle of a term in order to return to work at his church full-time.

Flake is married to Margaret Elaine McCollins and has four children. He is also a fellow at the Manhattan Institute for Policy Research.