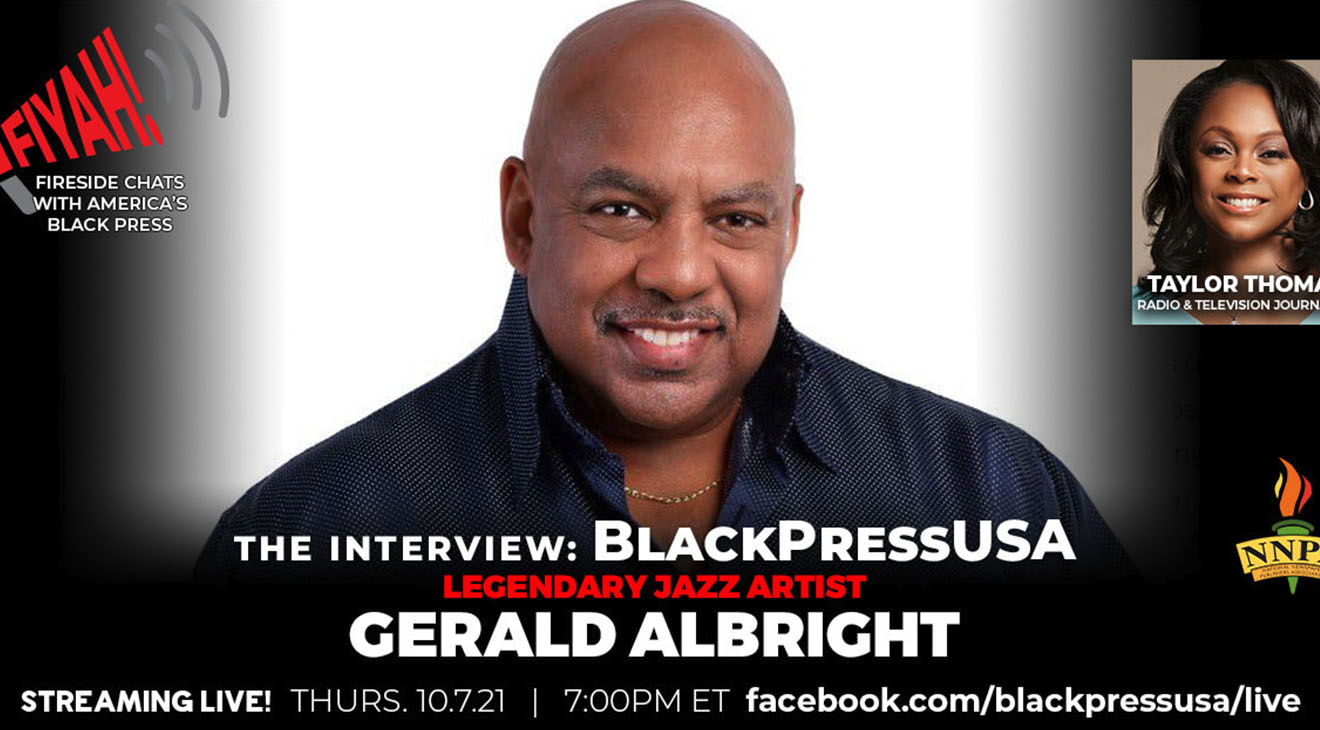 Gerald Albright joined the NNPA’s Taylor Thomas to discuss a wide range of subjects. Everything from his new EP, “G-Stream,” an ode to today’s current technology and streaming music platforms, to some of his classic recordings. Albright also discusses his long history with jazz as an artform, reminiscing about many of the music greats that he has had the privilege of performing with.

Born and raised in Los Angeles, Albright was already an accomplished saxophonist by the time he enrolled at the University of Redlands, but he switched to bass after he saw Louis Johnson in concert. A few months after graduating from college, he joined jazz pianist/R&B singer Patrice Rushen, who was in the process of forming her own band.

Later, when the bassist left in the middle of a tour, Albright replaced him and finished the tour on bass guitar. Playing both sax and bass, he became the consummate session and touring musician in the 80s, working with everyone from Anita Baker, Ray Parker, Jr., Atlantic Starr, The Temptations and Maurice White to Les McCann, Teena Marie, the Winans and Whitney Houston.

He launched his solo career in the infancy of what became the smooth jazz format, with Just Between Us in 1987 and has been a core part of the genre with chart-topping albums, countless radio hits and as a member of many all-star tours, including Guitars & Saxes and Groovin’ for Grover.

In the late 90s, he fronted a big band for and toured with pop star Phil Collins and did a dual recording with vocal great Will Downing called Pleasures of the Night. Between his last two Grammy-nominated solo albums Pushing the Envelope (2010) and Slam Dunk (2014), he enjoyed hit collaborations with two huge hits – 24/7 with guitarist Norman Brown and Summer Horns by Dave Koz and Friends (including Mindi Abair and Richard Elliot), which were also Grammy-nominated for Best Pop Instrumental Albums.

He toured with Brown and Summer Horns, and most recently has been on the road with South Africa gospel/jazz singer and guitarist Jonathan Butler. Albright’s other albums whose titles perfectly reflect their flow include Smooth (1994), Groovology (2002), Kickin’ It Up (2004) and Sax for Stax (2008).

Because Albright’s musical muse has taken him to so many fascinating locales along the contemporary R&B/urban jazz spectrum, he’s joyfully defied easy categorizations.

“Top to bottom,” Albright says, “Whether in concert, listening to my music over the radio or CD player, I always want my listeners to be taken on a musical journey with different textures, rhythms, chord progressions and moods. I want people to know where I’ve been and where I’m going, and to let them hear that I’m in a really good place in my life.”