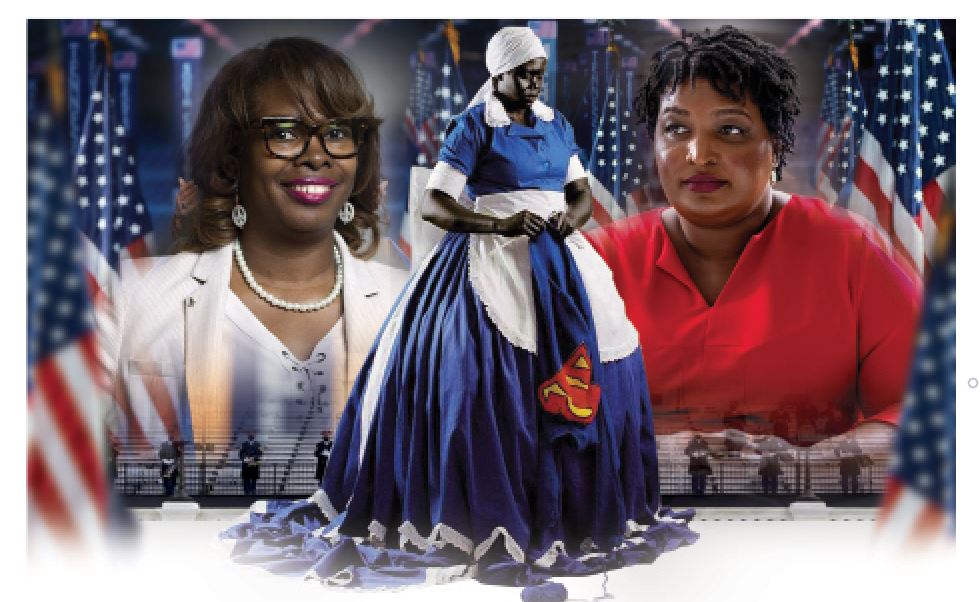 Forbes quantifies a “powerful” person by money, populations, media mentions and measurable impact. This baseline helps them decide who will fall among its “Most Powerful” lists and very few make the cut. For instance, all millionaires are not powerful, but a person with an empty bank account — but has influence — can be.

But one thing is for certain, a truly powerful person can start or change a movement and can make history along the way.  And when “power” is wrapped up in a beautiful Black package — it makes it even better.

Congresswoman Maxine Waters told MSNBC’s Joy Reid after Sen. Kamala Harris’ historical VP nomination, Black women “have shown that not only will they vote, but they will get out the vote. [And] they will fight for the vote.”

And in 2020, not only did 91% of Black women vote for Democratic presidential nominee Joe Biden according to NBC News exit poll results, but Black women have also been on the front lines of this year’s election, working to ensure that all eligible voters have their voices heard at the polls.

It’s no secret that, even after Jim Crow was “supposedly” long gone, the practice of voter suppression was alive and well, and while Blacks were no longer required to “count jellybeans in a jar,” they were faced to battle tricky “exact match” ID requirements, voter purges, felony disenfranchisement by stripping a person’s right to vote due to felony convictions, end to early voting in some locations and various voter registration restrictions.

Abrams today is arguably the most powerful woman of 2020. Thanks, in large part, to her, Georgia is now BLUE, and the Democrats have taken control over the House and Senate.

There are many people – including South Carolina’s influential Jim Clyburn, Atlanta’s Keisha Lance Bottoms and Kamala Harris’ HBCU regime – who helped reclaim the country, but Abrams and Brown were true powerhouses whose movements became some of Donald Trump’s worst nightmares and part of Joe Biden’s saviors.

Some could say, for both Abrams and Brown, the issue was personal. And frankly, we are glad it was. They say God gives his toughest battles to his strongest warriors – and the tough battle began when both Abrams and Brown lost their own races due to obvious voter suppression tactics.

Abrams was the first Black woman to become the gubernatorial nominee for a major party in the United States, and she was the first Black woman and first Georgian to deliver a “Response” to the State of the Union. And it was powerful, but she lost the gubernatorial race in 2018 by less than 55,000 votes to Georgia’s now-governor Republican Brian Kemp amid reports of voter suppression in the state. It’s reported that, between 2010 and 2018, Kemp, who served as Georgia’s secretary of state during that time, purged upwards of 1.4 million voters from the rolls. Most of the purges were of black and Brown voters. Abrams reflected for about 10 days after her loss, then got busy to change the course of America.

She launched Fair Fight to ensure every American has a voice in our election system through programs such as Fair Fight 2020, an initiative to fund and train voter protection teams in 20 battleground states.

Abrams dedicated herself and her work over the last two years to empowering people to use their voice and their vote and has helped register 800,000 people in the state of Georgia, an effort that looks likely to have been a key reason the state voted for its first Democratic presidential candidate since 1992.

Brown, the co-founder of the Black Voters Matter Fund, ran for State Board of Education in Alabama’s 5th district against incumbent Willie Paul in 1998. Brown lost by a little over 200 votes, but minutes after the election was certified, she received a call from the state’s Democratic Party letting her know that 800 ballots had been found in a safe by the county sheriff. There was one problem, however. It was technically too late for the ballots to be counted, and Brown didn’t have the money to take legal action.

Today, Black Voters Matter Fund does work in Florida, South Carolina, Tennessee, Georgia, Louisiana, North Carolina, Pennsylvania, Alabama and Mississippi to ensure that Black communities are not only registered to vote but also understand the power of their vote. The organization also works to advocate for the expansion of voting rights policies that include early voting, resistance to voter ID laws and a strengthening of the Voting Rights Act of 1965.

Many may not know, but with the 2013 Shelby vs. Holder decision, states are no longer required to have voting changes pre-approved, including polling place changes, changes to candidate qualifications or changes to voter ID laws.  As a result, voter suppression has been on the rise across the country.

In Georgia, the “use it or lose it” laws struck voters from registration rolls if they hadn’t participated in an election within a certain period of time. In fact, one and a half million people were purged from Georgia’s voter rolls between 2012 and 2016.

But Georgia’s “Good Ole Boys” became no match for Abrams and Brown, who gave new meaning to the phrase “strong Black women.”

Now, thanks to Georgia’s historic wins, the new Biden administration and Democratic House won’t have to deal with a Republican-run chamber. With both Raphael Warnock and Jon Ossoff winning both of Georgia’s Senate seats in a run-off election, the Democratic Party is now set to run the Senate as a Democratic vice president, Kamala Harris, will cast tie-breaking votes.  It is more certain that they will no longer face the same checks on their policy priorities that they would have faced with a Republican-controlled Senate.

The power of the Black vote made that happen.

“We changed the trajectory of the nation. Because our combined power shows that progress is not only possible—it is inevitable,” Abrams said.

Always remember, your money and your vote are the two most powerful assets you have.